51% of the Total Recovered cases from Five States

India has leaped across a significant milestone in its fight against COVID, today.

Total Cumulative recoveries have crossed 1 crore mark (10,016,859). India’s recoveries are the highest in the world.

19,587patients have recovered and discharged in the last 24 hours. The national Recovery Rate has further grown to 96.36%. The gap between active cases and recovered cases is continuously increasing (97,88,776).

The Recovered cases are 44 times the number of Active Cases.

The total positive cases of the country today are 2,28,083 and comprise merely 2.19% of the total cases. 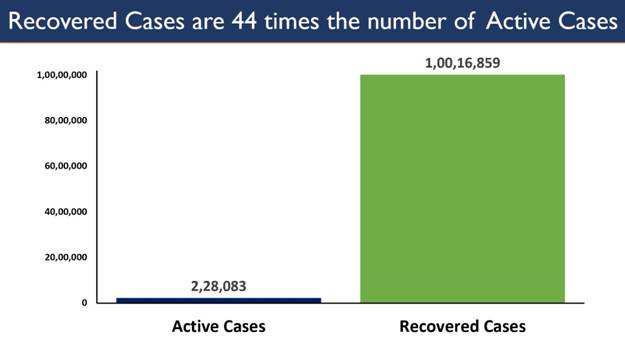 India’s Recovery Rate is the highest in the world. Countries with higher caseload are reporting lesser Recovery Rate than India’s.

17 States/UTs have weekly positivity Rate more than the National Average.

79.08% of the new recovered cases are observed to be concentrated in 10 States/UTs .

222 case fatalities have been reported in the past 24 hours. Of these, 67.57% are concentrated in six States/UTs.

Check out the best IPL Satta at PureWin and take advantage of the greatest cricket betting odds India can offer today. Win big with your real rupee investments at PureWin’s IPL Satta platform and withdraw your earnings in a fast and secure way.
Choose from the best online roulette game real money casinos available in India today and enjoy the picture-perfect live or RNG casino experience. Feel the thrill of the world’s most popular casino game and spin the wheel on the best real money online roulette games.

Above gaming Ads, involves an element of financial risk and may be addictive. Please play responsibly and at your own risk. Under 18 age, not allowed to play at all.